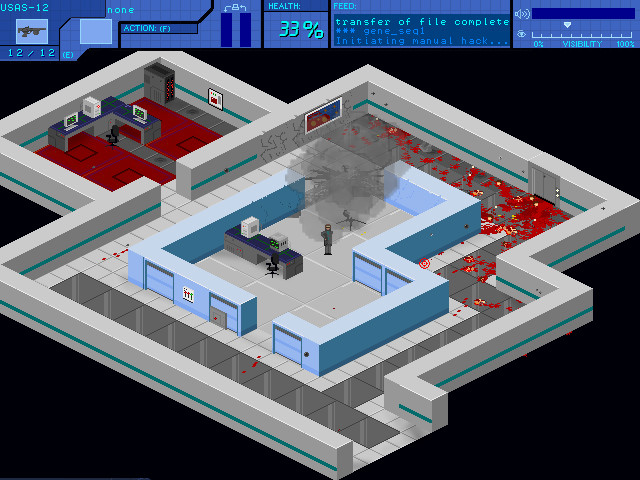 DataJack is a 2D isometric stealth action shooter originally released in 2013. In the not-too-distant future, governments have dissolved and powerful mega-corporations wage covert wars for territory and the control of information. As a freelance mercenary, you will conduct sabotage, assassinations, espionage and ambushes on their behalf to earn a living.

Do missions on behalf of three separate factions to earn credits. Your reputation will grow from being a simple goon for hire knocking off fast food restaurants, to a highly-paid corporate assassin infiltrating high-security laboratories and office buildings.

Before you go weapons hot, consider scouting the location for cameras, gun turrets, guard patrols, and computers of interest.Plan your approach. Hack the locked doors. Hack the network and steal some valuable data and disable the cameras.

Sneak up behind the guard and take them out before they can alert the others. Sabotage the alarm system. Trigger your remote charge to explode the generator for an instant lights-out, or cover your tracks with smoke grenades.

A successful mission combines careful planning with skilled improvisation when things go wrong. Of course, it may be best to take a loud approach and dominate the enemy with overwhelming firepower before they have a chance to react.

All walls and obstacles are fully destructible, if you remembered to bring the heavy ordinance.You can open new entrances, or set up emergency exits. Just watch out if the robot chasing you is armed with a rocket launcher!

From submachine guns to shotguns, sniper rifles to rocket launchers, everything you need to conduct urban wetworks can be found at the local black market arms trade.Choose from an array of primary and secondary weapons and then fine-tune their stats for stealth, accuracy, or stopping power by purchasing unique weapon modifications.

Round out your kit with EMP grenades, field health kits, IR sensing goggles, ninja equipment, and various other military surplus.

Use your credits to upgrade your arms, legs, eyes, and torso for bonuses to combat, speed, and stealth. Pay the street doc to heal your numerous wounds between missions. With augmented eyes, you can see laser tripwires before setting them off, while augmented legs may give you the drop on your unsuspecting enemy. – Steam