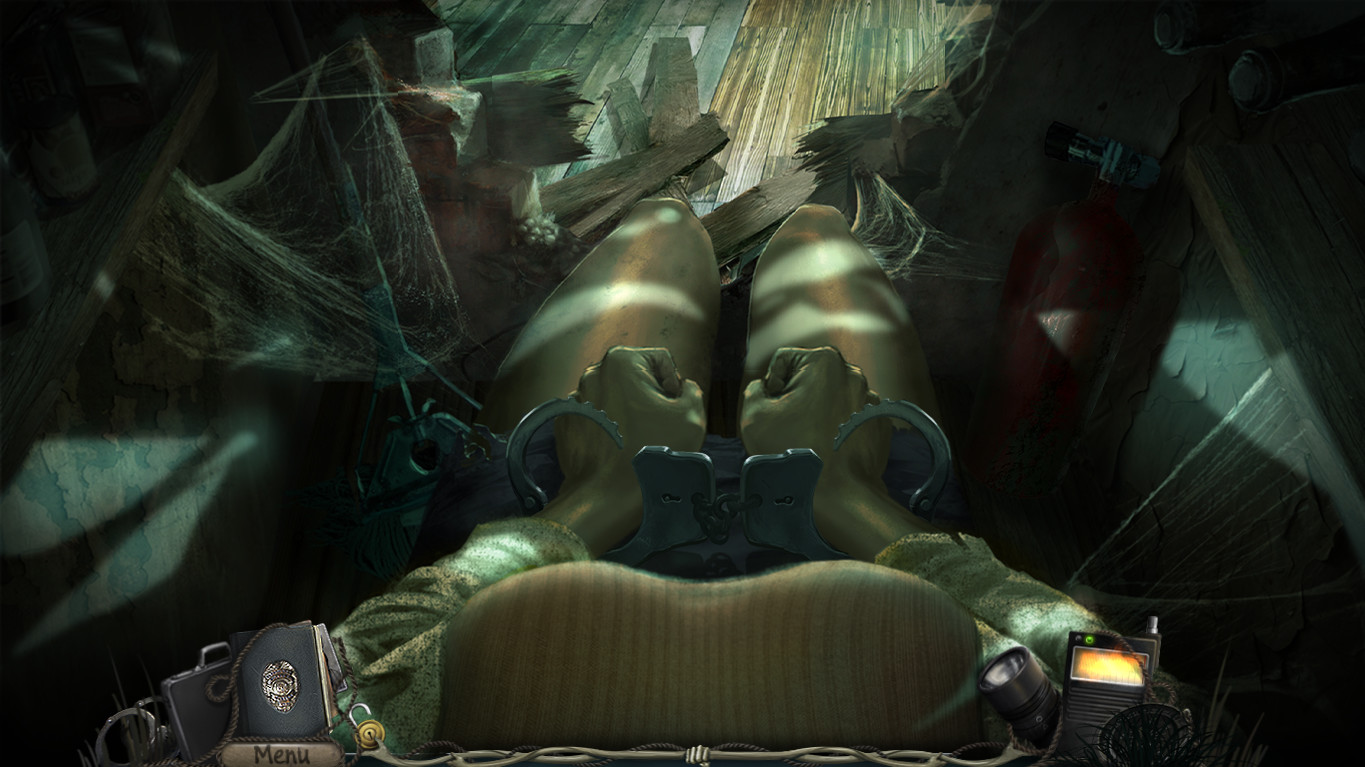 The Hope Lake Boarding School was abandoned long ago, when one of its teachers drowned by accident. Many years later, all of the female students began to disappear, one by one. Visit the place where it all began. Try to pick up the maniac’s trail and put a stop to his crime spree. 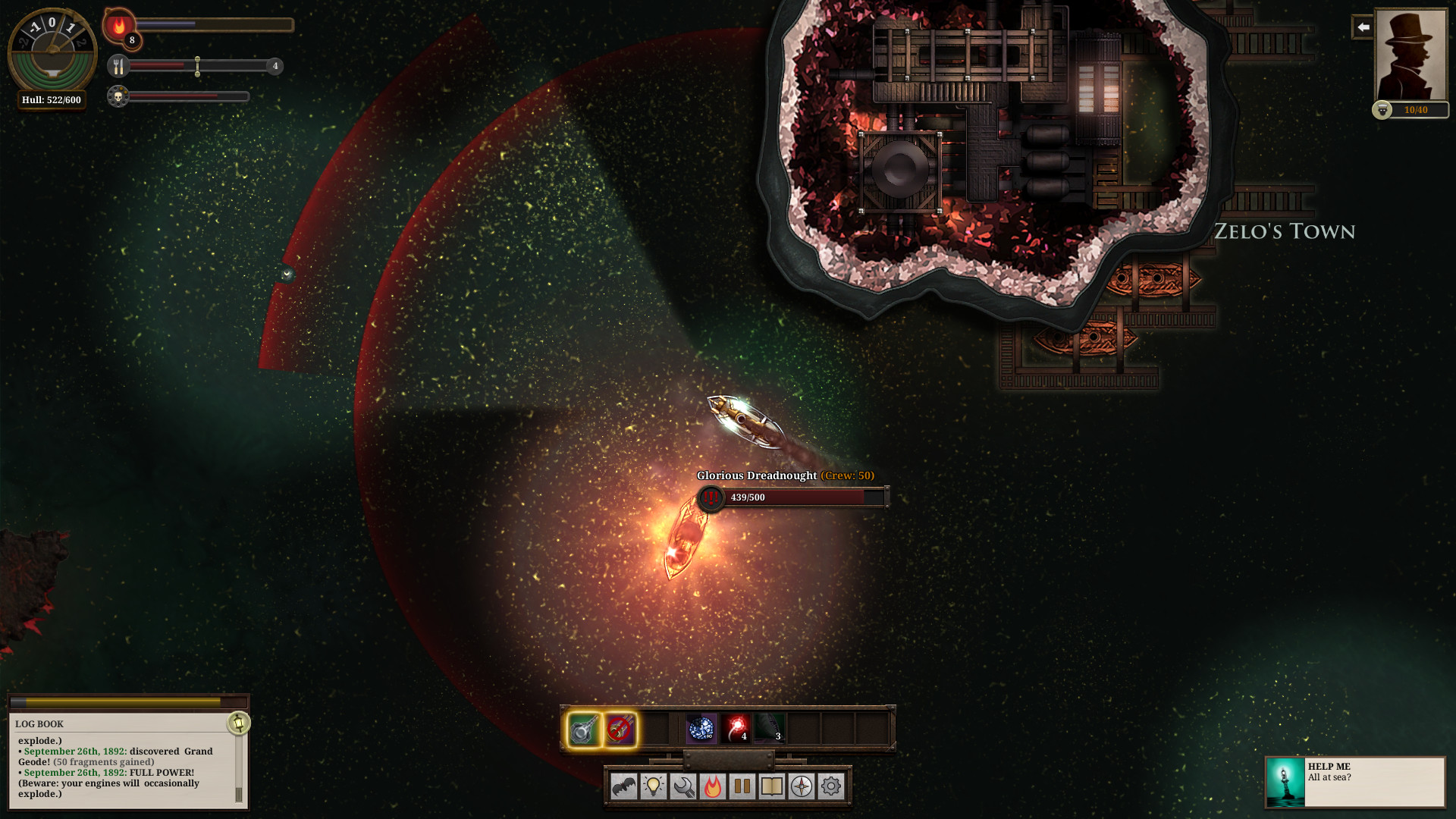 Sunless Sea is a Gothic Horror RPG with a focus on exploration, exquisite storytelling and frequent death.

Captain a Victorian steamship on a vast underground sea

If the giant crabs, sentient icebergs and swarms of bats don’t get you, madness and cannibalism certainly will. But that old black ocean beckons, and there’s loot for the brave souls who dare to sail her.

Seek out intriguing individuals for your crew

Hire unique officers like the Haunted Doctor and the Irrepressible Cannoneer. Each has a story to tell, if you can draw it out of them.

Stray from the gas-lamps of civilisation

Light and dark, terror and madness: spend too long on the wide, dark sea and your crew will grow fearful and eventually lose their sanity.

A deep, compelling world packed with 350,000+ words of stories and secrets. Find your father’s bones. Determine London’s destiny. Defy the gods of the deep sea.

Your captain will die.

Pass on resources from one generation to the next. Acquire a family home and a hoard of heirlooms. Build a legacy of zailors who braved the sea and lost – or, occasionally, won.

Who are Failbetter Games?

We’re a boutique games studio based in London, UK. We’ve been making indie games since 2009. If you’ve read this far, this game is almost certainly for you. – Epic

Once there was a wicked witch. And then one day she decided to get married, and not to someone, but to a handsome prince.
The only problem – all the princes were engaged. All of them were picked up by beautiful princesses. Back then a cunning plan germinated in her dark soul – to destroy a family happiness of all beauties, and to turn the princes into frogs unless and until some of them come to senses and want to become betrothed of the evil witch.
She lulled to eternal sleep one of the princesses along with her servants. That’s how the legend about Sleeping Beauty appeared.
The young Snow White was poisoned by enchanted apple, and beauty’s body rests in the deep caves in the custody of seven gnomes.
Witch cut beautiful long hair of Princess Rapunzel and imprisoned her in an inaccessible cave among waterfalls. And a lovely Miss World was imprisoned in Witch’s basement. Just in order to teach others not to do so.
You will have to set free the frog-princes from Witch’s captivity, to help them to get on to the beautiful brides to remove the witchcraft by kiss of love.
But will you be able to discover all the secrets of Witch and restore the happy endings in fairy tales? – Steam

Having searched Eastern and Western Europe for a missing heir, Kate Walker finally completed her long and arduous journey, obtaining the signature of Hans Voralberg and closing the automaton factory buyout.
Mission accomplished? Not for this sophisticated New York lawyer…
An unlikely pair, young Kate Walker and old, eccentric Hans Voralberg now set off on a journey together: in search of the last of the fabled Syberian mammoths at the heart of a long and forgotten universe. The surreal quest Hans began alone several years ago will come to a final close as he and Kate face obstacles far more dangerous than ever before, testing their courage and determination.
Far and beyond, a mystical Syberia awaits their arrival…

CHOOSE YOUR WARFRAME
With more than 30 Warframes, each fully customizable with their own unique abilities, you can create the perfect Warframe for you.

ASSEMBLE YOUR ARSENAL
Katanas. Crossbows. Flamethrowers. Expand your Arsenal with more than 300 diverse Weapons, then modify each one to match your playstyle.

EXPERIENCE FAST-PACED COMBAT
Slice and dice through hordes of enemies, or go in guns blazing, or sneak your way in — the choice is yours.

A SOLAR SYSTEM IN RUIN
In the far-future world of Warframe, grotesque clones and capitalist machines dominate our solar system. Fight back against greed and corruption as you explore 18 worlds filled with techno-organic horrors.

SQUAD UP
You don’t have to work alone. Invite three friends or fight alongside the 38 million strong in our Tenno community.

NINJAS PLAY FREE
Warframe is entirely free-to-play. With no barrier to entry, there’s nothing to stop you and your friends from joining our world. Welcome to the Origin System, Tenno. – Steam

Dive headfirst into a dystopian world devoid of society, law, and order. RAGE 2 brings together two studio powerhouses–Avalanche Studios, masters of open world insanity, and id Software, creators of the first-person shooter –to deliver a carnival of carnage where you can go anywhere, shoot anything, and explode everything.

An asteroid has annihilated 80% of the earth’s population, and humanity’s numbers are dwindling. Ruthless and bloodthirsty gangs roam the open roads and the tyrannical Authority seek to rule with an iron fist. As Walker, the last Ranger of the wasteland and a threat to their power, you have been robbed of your home and left for dead. Now you’ll have to rage for justice and freedom. With ludicrous vehicle combat, super-powered first-person mayhem, and an open world full of emergent madness, you will tear across an unforgiving wasteland battling sadistic gangs to find the tools and tech needed to crush the oppressive rule of The Authority once and for all. – Steam 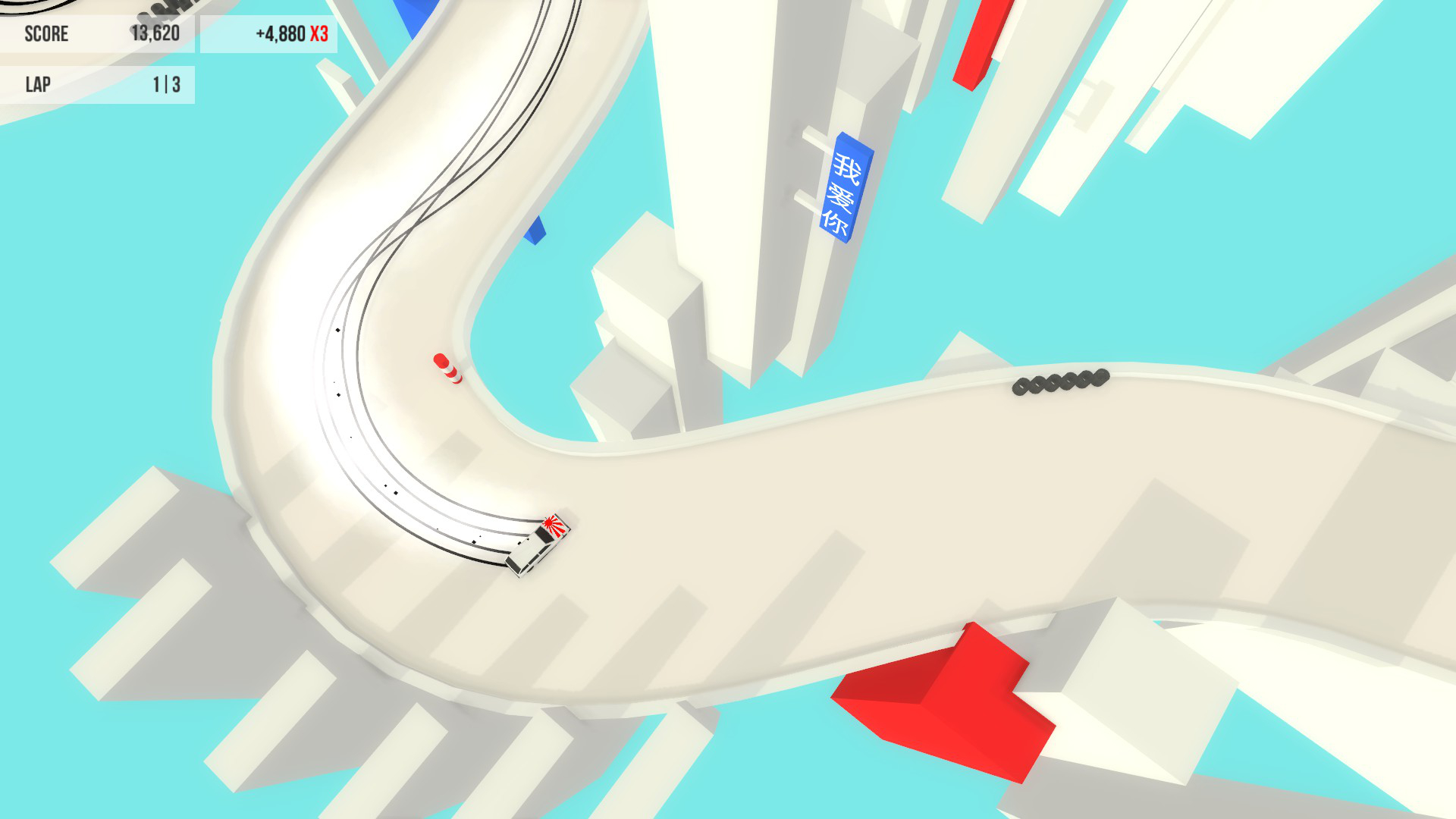 Drifting: the Art Of Sliding Sideways.

In Absolute Drift, you will master the art of drifting. Practice your skills in Free-Roam and compete in drift events such as Driftkhana and Mountain Drifting. 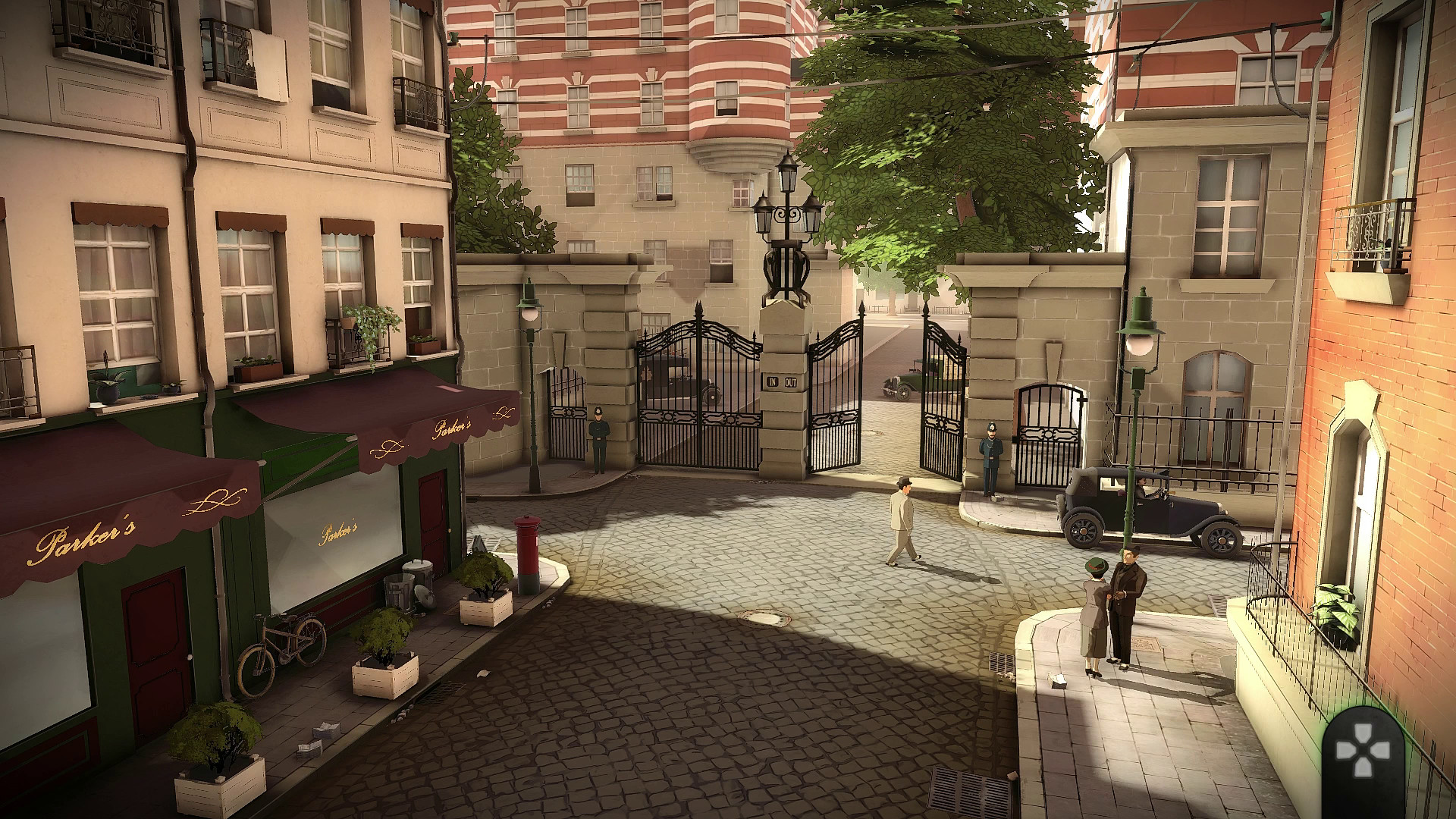 Your weapon is your knowledge. Your wits will be put to the ultimate test!

The ABC Murders is an adventure and investigation game adapted from the classic Agatha Christie novel. The player embodies the famous Hercule Poirot in a 3rd person perspective adventure game packed with mysteries. Once again, the private detective will find himself up against a mysterious opponent who goes by the name of “ABC”.

Your intelligence will never have been so challenged!

You will have to explore many crime scenes in various cities set in beautiful surroundings across the United Kingdom. Leave no stone unturned when it comes to cross examinations and deadly puzzles!Observe, question and explore everything possible in order to make the smartest deductions and understand the murderer’s plans!

Kate Walker, a young ambitious lawyer from New York, is handed what seems a fairly straight forward assignment – a quick stopover to handle the sale of an old automaton factory hidden in the alpine valleys, then straight back home to the US.

Little did she imagine when embarking on this task that her life would be turned upside down. On her expedition across Europe, traveling from Western Europe to the far reaches of Eastern Russia, she encounters a host of incredible characters and locations in her attempt to track down Hans, the genius inventor – the final key to unlock the mystery of Syberia. Her voyage across land and time throws all she values into question, while the deal she sets out to sign turns into a pact with destiny.

On the edge of Terran space lies Halcyon 6, a derelict starbase left behind by a mysterious precursor race. Your mission is to reclaim the derelict station and rebuild it.
A mysterious alien force is making a beeline towards Earth and this starbase is the best chance for the New Terran Federation to establish new alliances, research new technologies and otherwise figure out a way to stop the impending invasion.

Using only the resources you can salvage from the derelict station and gathered from nearby star systems, it’s up to you to rebuild the starbase to lead the Terran Republic’s scientific research, exploration and diplomatic efforts on the edge of known space.

Halcyon 6 is a passion project who’s design is inspired by our years spent playing classic games like Star Control, Master of Orion, X-COM, Civilization and new classics like FTL.

Motley Crew: Each crew member has unlimited potential for acquiring unique behaviours, traits and abilities, for better or for worse. Making the best use of your dysfunctional crew will be one of the keys to success. Who should be your main Science Officer? The insomniac that works insane hours but has an addictive personality or the agoraphobic mad genius?

Encounters of the Weird Kind: There are 6 alien factions in Halcyon 6 and they are all quite different with varying objectives and personalities. Only your wit and your crew’s skills will help you navigate the diplomatic waters to gain them as key allies or valuable trading partners. – Steam